When I first started thinking about offering slide milling service, I'm surprised at what some places are doing - in a bad way. So let's take a look at the problems first:

Exhibit A - notice the "wavey" pattern? It is the result of "adaptive" tool path generated from CAM software, which is designed for roughing (bulk material removal) and not finishing. Because it is not designed for finishing the floor of a flat surface, and that end mills are not perfectly flat at the bottom, when used with a large step overs (distance between the waves) it leaves marks high enough that won't even go away after sand blasting, as seen from the photo after Cerakote. 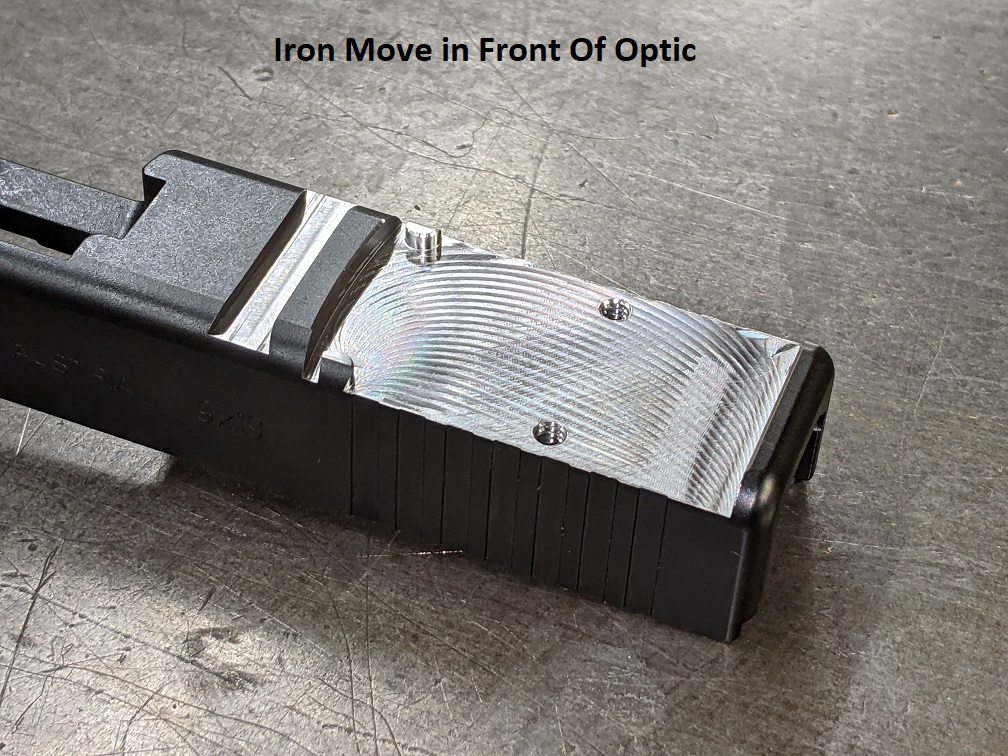 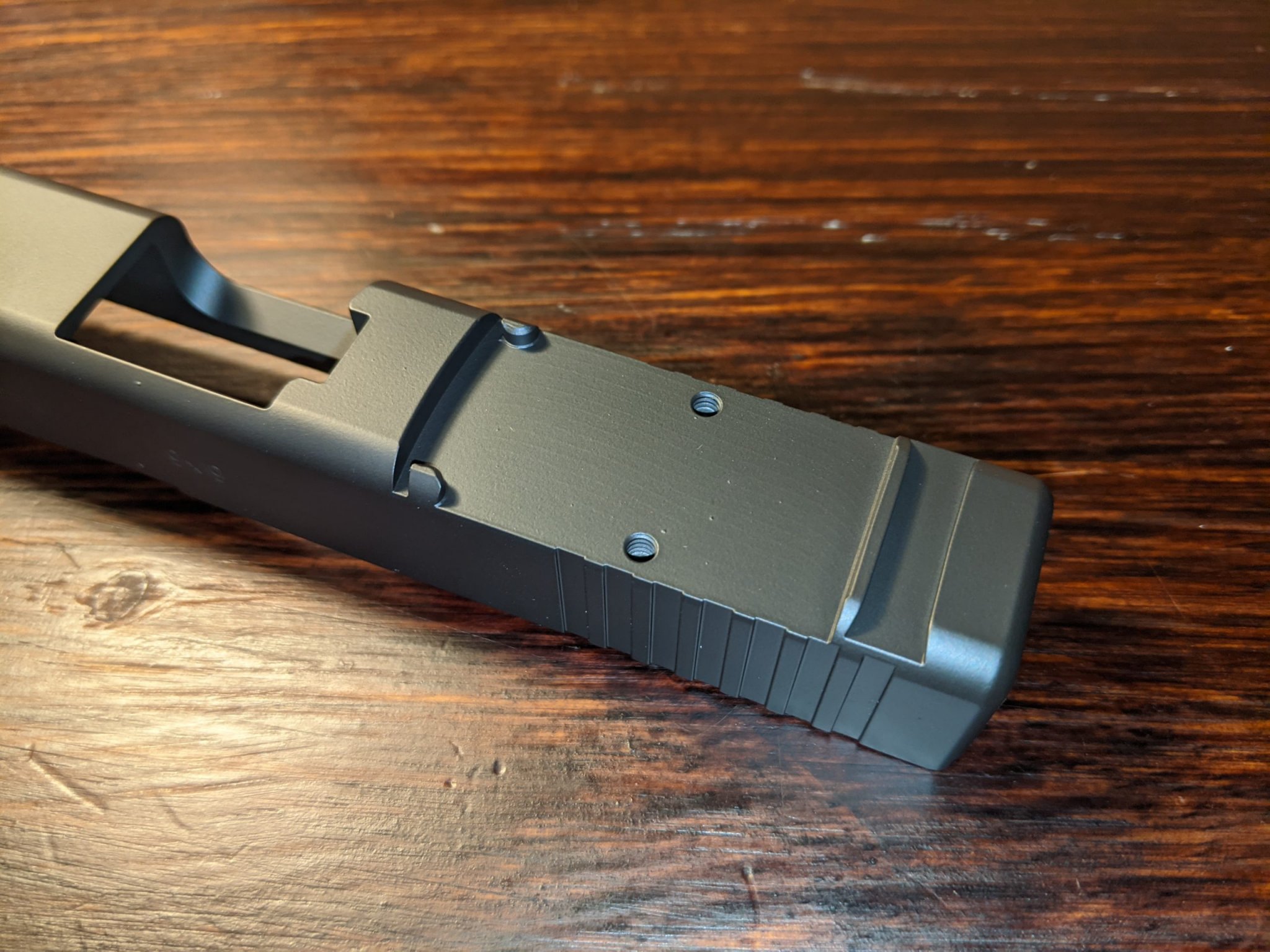 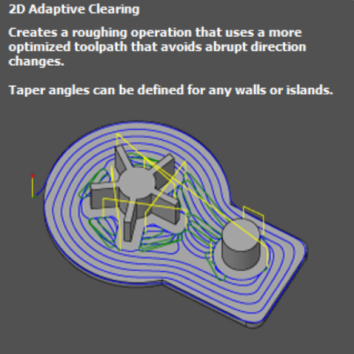 Exhibit B - Another one that I see quite common is the absent of locating post.

Most of the material removal when milling the slide is done with 3/8" or 1/4" end mill, but the distance between the post and the front wall is about 1/16", which means another smaller end mill must be used to machine the posts - that's more tooling, programming, tool change, cycle time, etc..

But the problem is, and especially since almost all the services that do not leave locating posts machine the pocket to be a "universal/oversized" fit, the 2 screws are doing all the work restricting the multiple degrees of freedom of the red dot on the slide: not only is it keeping the red dot down, but it also must keep the red dot along the bore during recoil, side-to-side perpendicular to the bore, and any rotational movement. 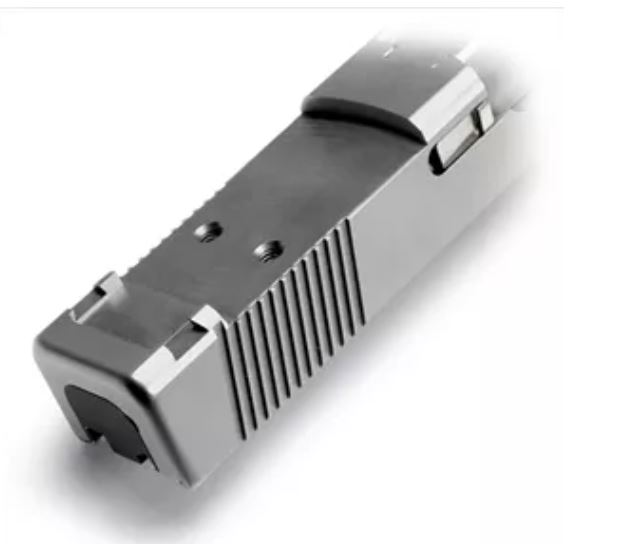 Exhibit C - Another approach you often see is to actually have posts for the screws. At a glance it has some benefits, such as providing additional locating of the red dot, longer screw engagement length, etc..

And while the posts around the screw would increase the thread engagement length, it comes at the cost of down sizing the screw. In the case of RMR, that means going from a #6 to #8. when #6 screws can already provide 1x thread engagement even on the ejection side, I don't think the tradeoff is worth it. 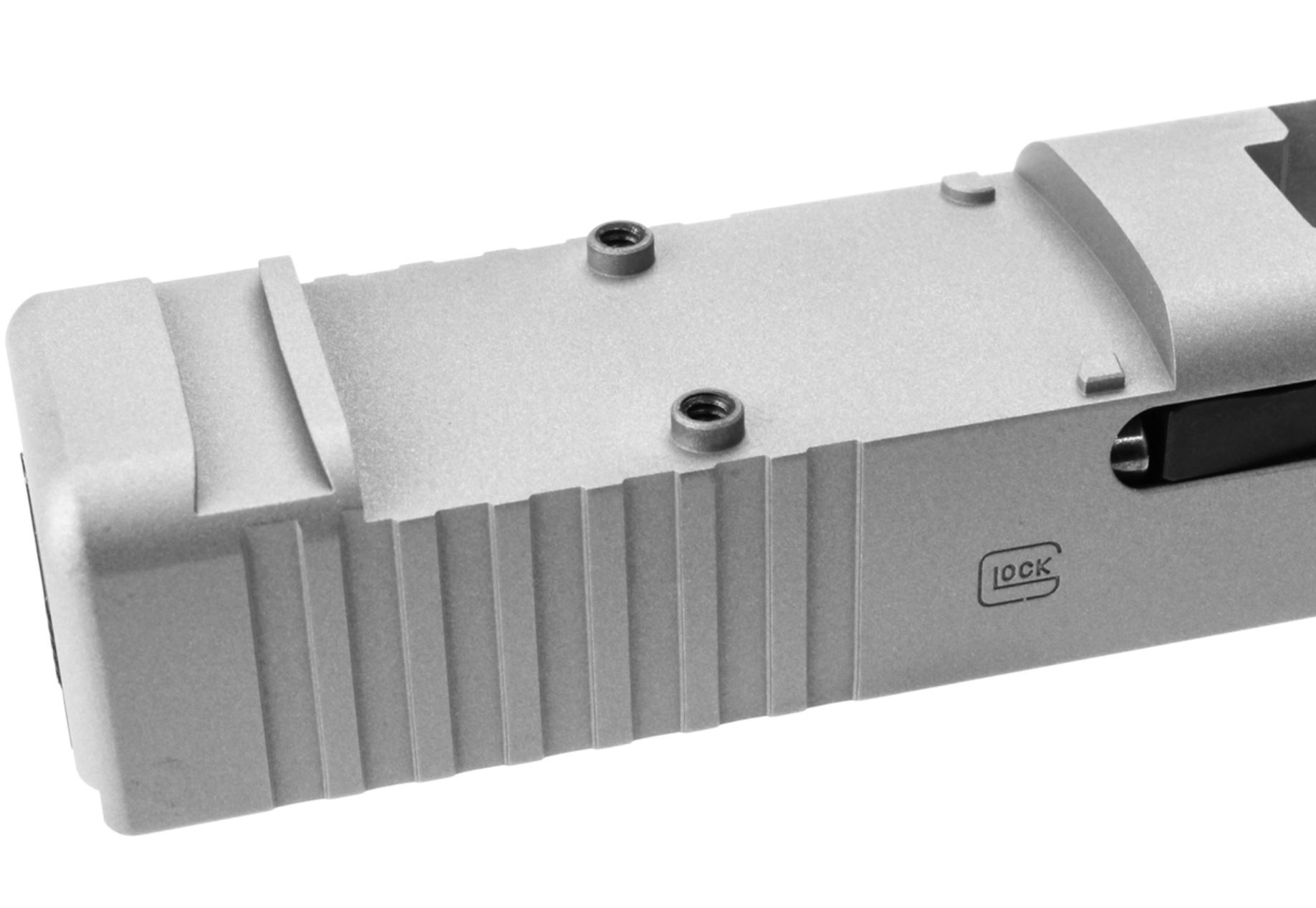 Here you can see one without the screw post, and the locating post is about 1/4 round. I think this is fine for a universal fit, where the front wall doesn't make contact with the red dot, but rather rely on the back of the post and back wall to constrain the red dot on the Y axis. Another detail you may notice is that the front wall area and the rest of the floor are machined with two different tools, when their height isn't perfectly measured/stored in the machine controller, they don't blend well leaving a small ledge that you can see & feel (right of the red dotted line). 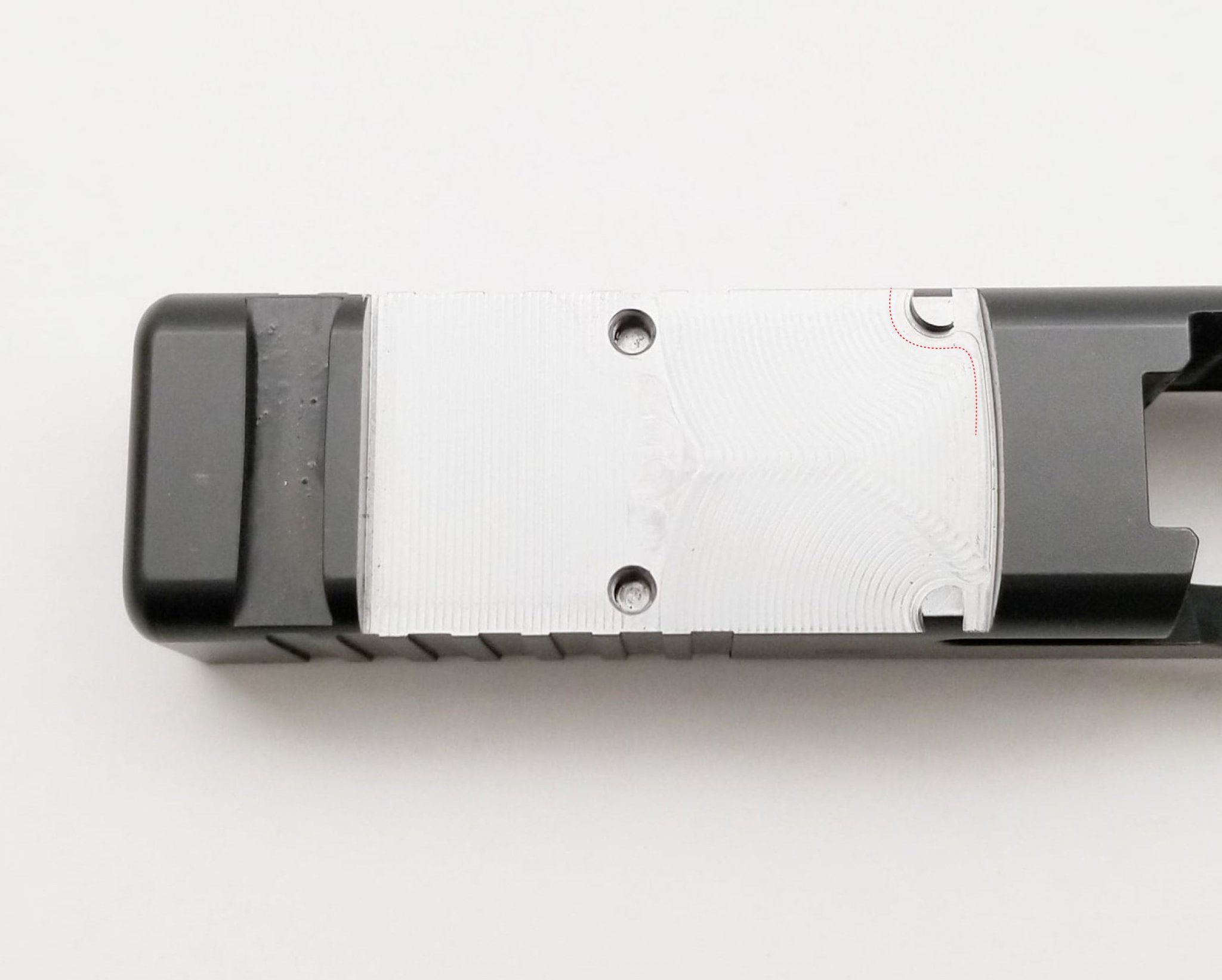 So how are we doing it here at Department of Techne, and what are some of the design considerations?

1. There's no screw posts, this allow me to keep the screw size #6-32. The left side is drilled & tapped deeper, while the right is shallower to not interfere with the extractor plunger. I do drill thru into the plunger channel, as it is required to tap the thread deep enough. Drilling thru doesn't cause any issue in my opinion, the plunger channel is exposed to the environment both front/back anyway, and any foreign matter ingress into the red dot is stopped by the screw.

2. I do have the front locating pin, but they are diamond shaped, and only contact the red dot towards the center line. I also machine the pocket to the low end of the tolerance band, and walk it out both front/back by 0.001" at a time, until I have about 0.0005"-0.001" clearance which is needed for Cerakoting. This way, the locating pin constrain the red dot perpendicular to the bore, the front/back wall constrain the red dot along the bore, and the screw is only constraining it up/down so the stress is reduced. In fact the fit is so tight, care must be taken care to drop the red dot straight down onto the slide or it won't fit, and I can cycle the slide with out the screw and the red dot will also stay in place. 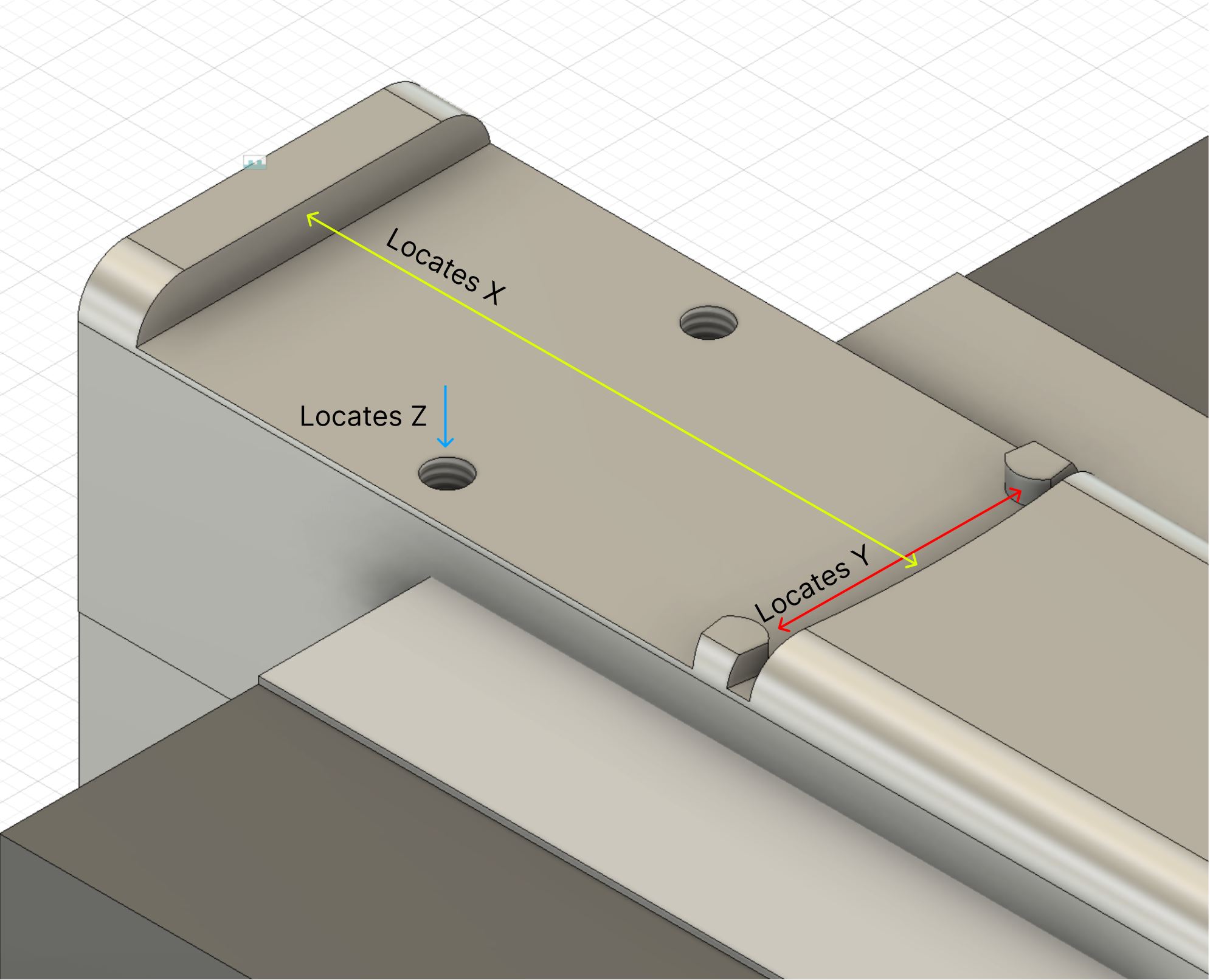 3. Since I need to use the 1/16" end mill to machine the front locating pin and the front wall, I also used it to finish the floor with "flat" tool path, which is a tool path designed for finishing operation on, you guessed it, flat surface. This is the longest operation because I have to take very small step overs, but the benefits are: 1) I don't have to worry about blending the floor created by two different tools and make sure the height measure is spot on, or else you will see/feel a ledge when the larger tool transitions to the 1/16" tool up front. 2) It also creates a nice visual effect - not that it matters, because it's flat enough that you won't see anything after it's sand blasted/coated. 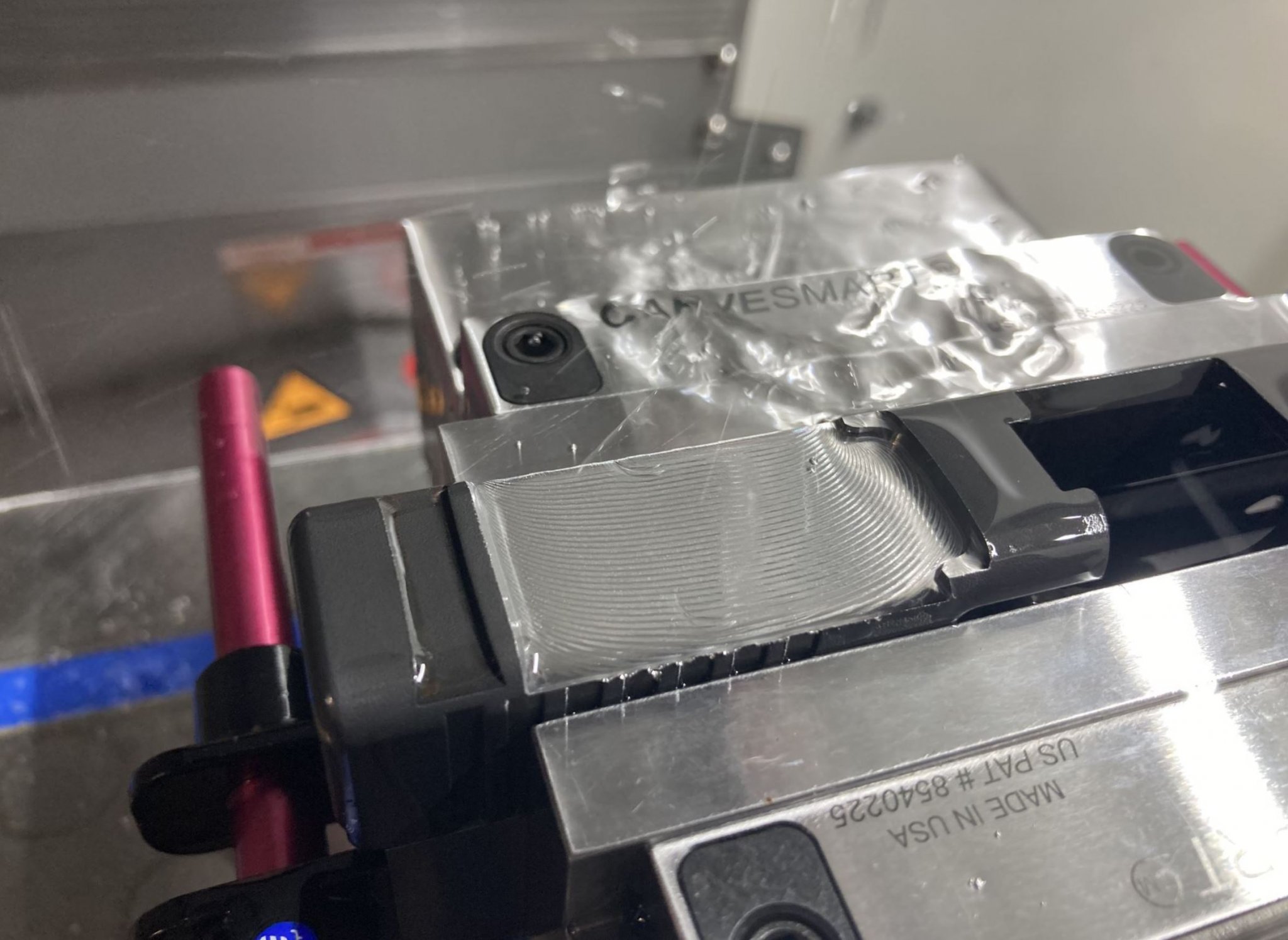 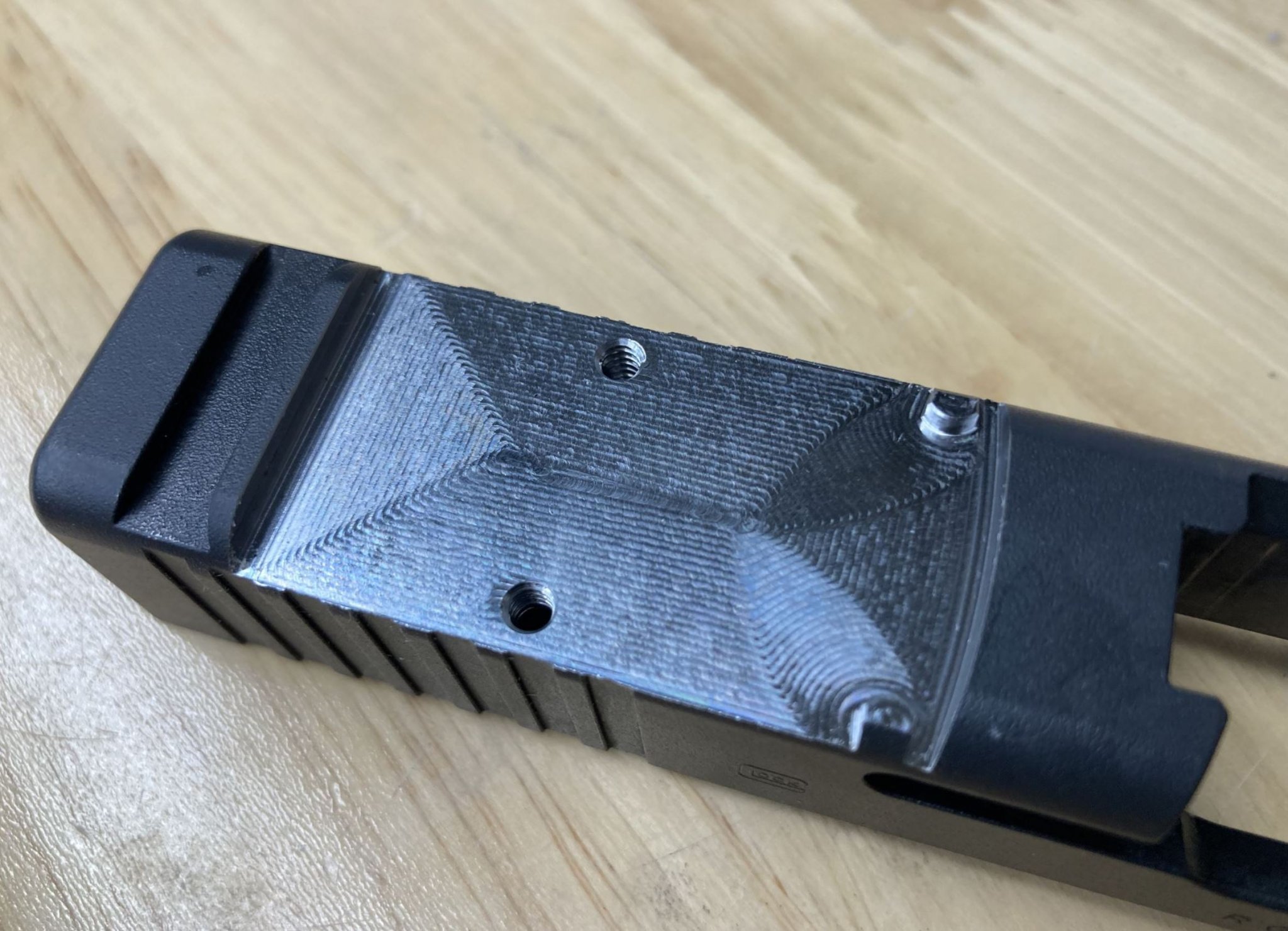 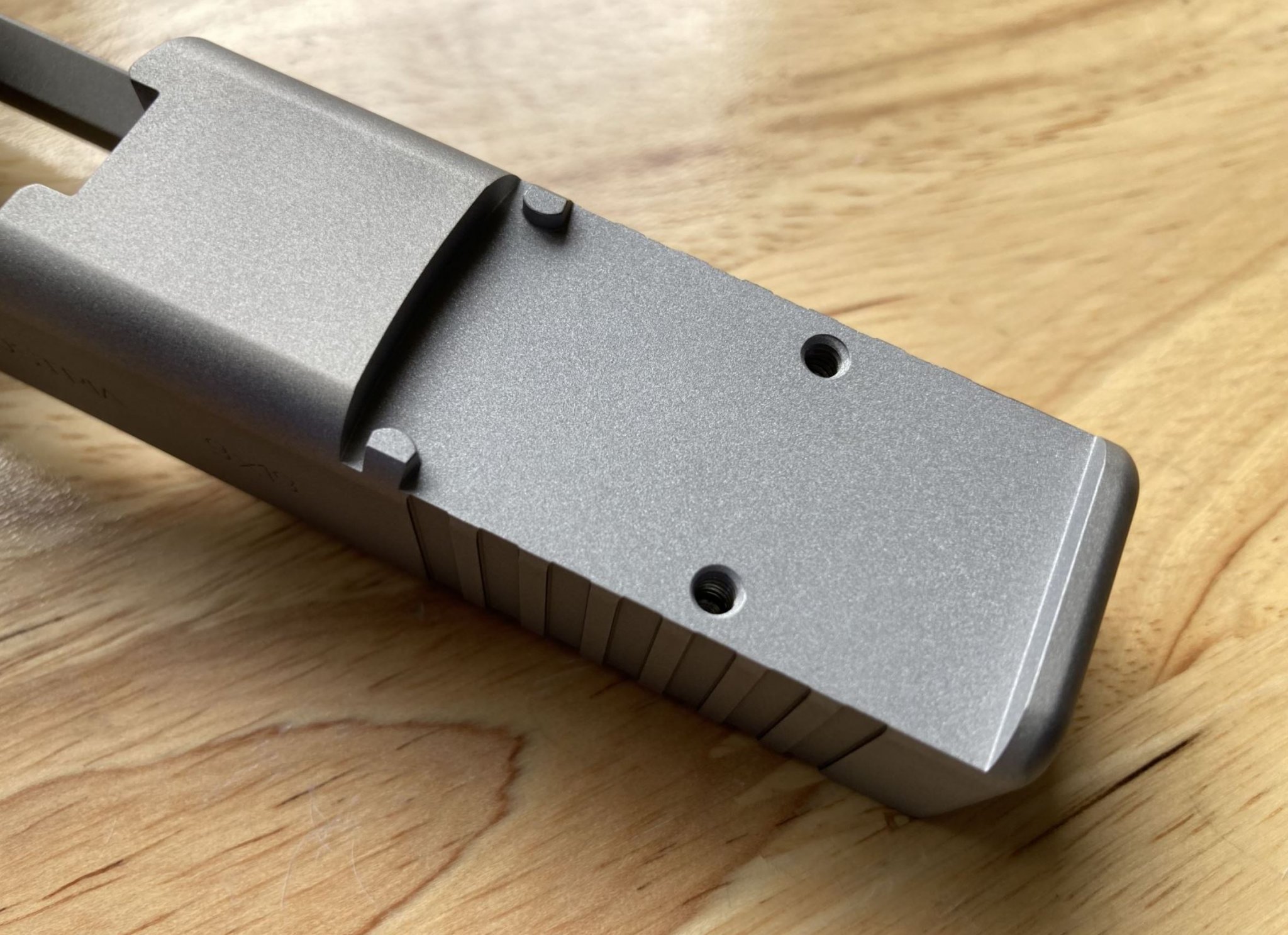 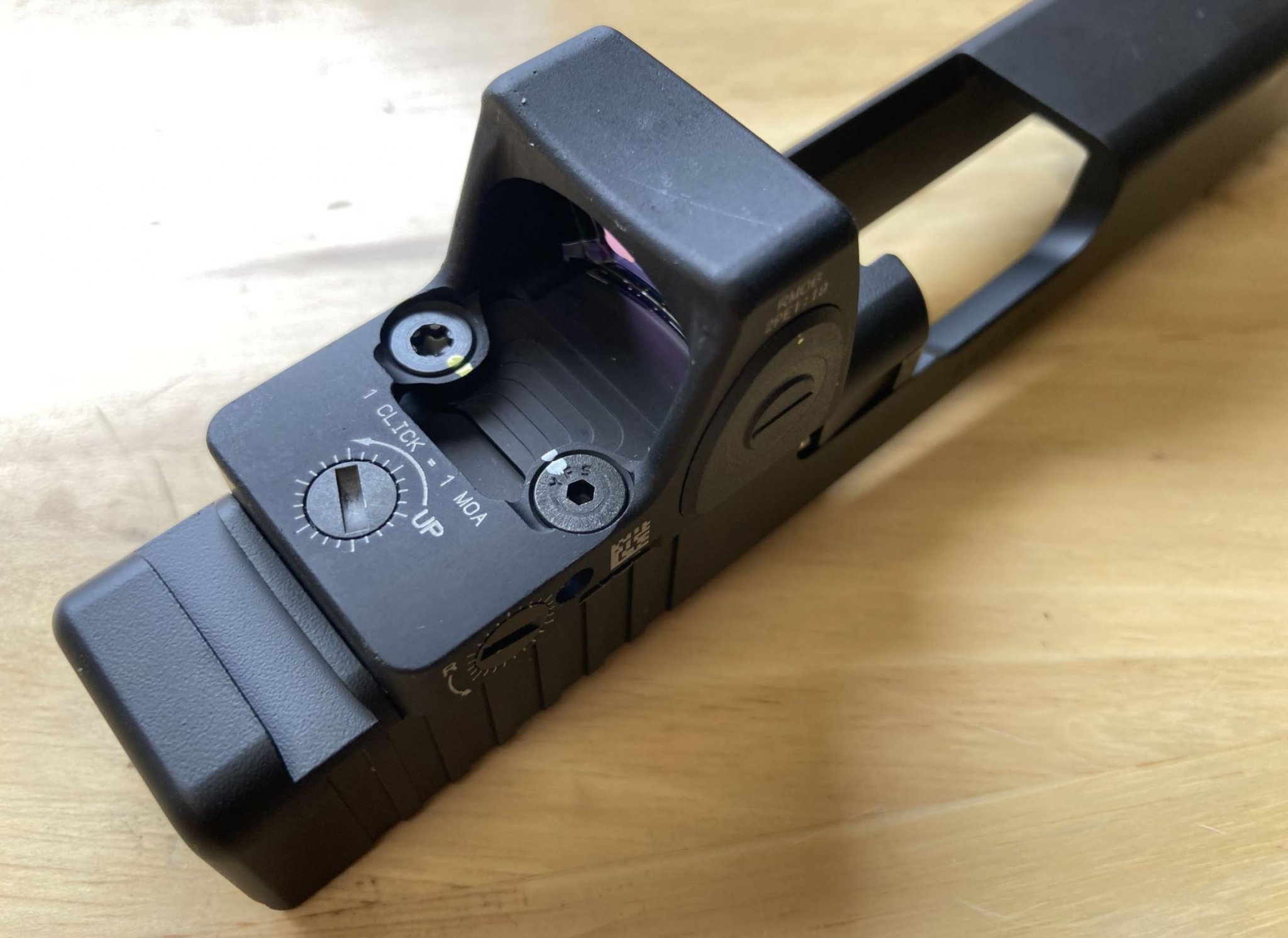 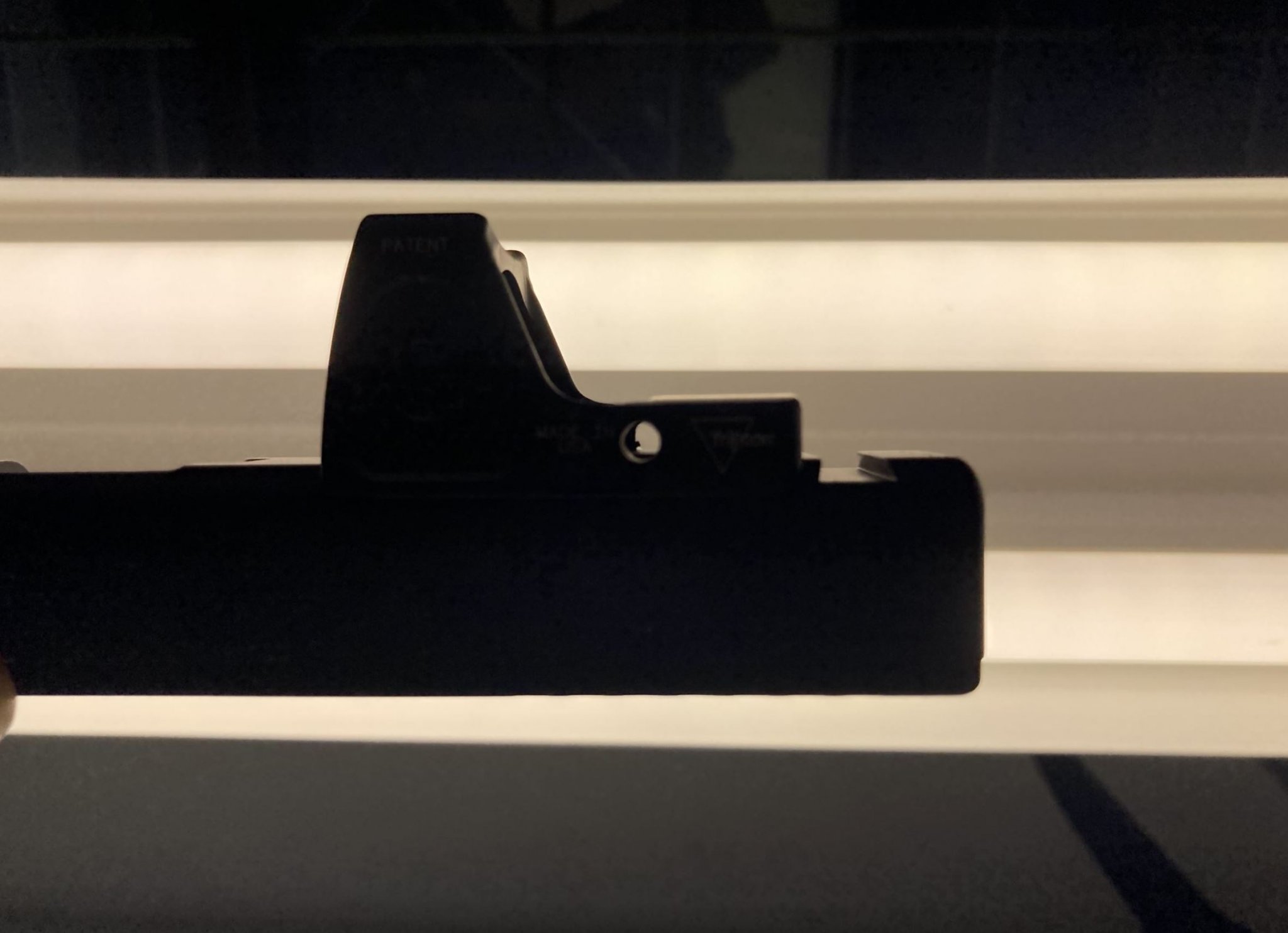 4. Another small detail, is that the work coordinate system is set at the back (X) / top (Z) / middle (Y) of the slide. The important bit is the Y-axis (bore line) being set at the middle, because the width of the slide can vary by a bit, probe both side of the slide to find the center ensures the red dot is perfectly centered.